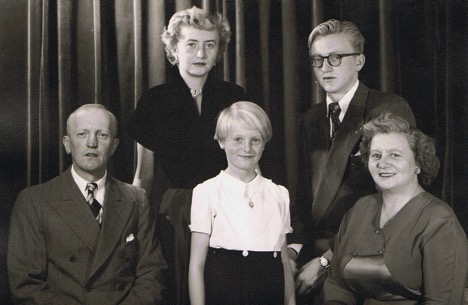 Amma Lilla (pictured as a young girl, in the middle of the photo) is a woman who has no interest in following any of the written and unwritten rules of being a grandmother. An amma, who falls asleep on the couch watching soap operas with the volume turned all the way up, instead of quietly reading in bed. An amma, who takes American line dance lessons and prefers to make friends at the bar rather than the traditional sewing club. An amma, who scandalously, does not knit.

My other amma knew all the rules in the granny rule book by heart. I wouldn’t be surprised to see a picture of her in the dictionary if I were ever to look up the word “amma”, the word for grandmother in my language. She’d be standing in the kitchen (I rarely saw her sitting), wearing her soft pastel pink apron with the flowers, the perfect short-cut grey curls on her head, you would never guess it was a wig. Maybe she’d be holding grandpa’s cup of coffee, black with two sugars. The look she must’ve had on her face when her son got together with my mom and she met amma Lilla.

As the youngest of three, she got the nickname Lilla, meaning little. And even though she later grew up to be an average sized woman (maybe even a little taller than average) she would always be called Lilla. Even when she became a grandmother, she was called amma Lilla; Little Grandmother. But it’s okay, she likes being thought of as young. As a child I asked her how old she was and I memorized the answer: She was 47. At the time, I didn’t realize her age changed every year, but she liked being 47 years old, so we agreed to keep it that way. She is still 47 today.

Amma Lilla is two people; the day-time amma and the night-time amma. Both live inside the same body, but they are completely unaware of each other’s existence. Much like a coin, the two sides will always face away from each other and it is physically impossible for one side to see the other. They don’t even share the same memories. When I tell day-time amma about night-time amma, she says I’m making things up.

Both ammas would do anything for their family, although they go about it in very different ways. Day-time amma likes to ask me about my life, but those conversations often drown in worries about anything and everything. I tend to keep things from her, even mundane things like problems with my book-keeper. Her heart is fragile, you might even say it is “little” and I’m afraid there’s not enough room for all those worries in there. Night-time amma is different. She still worries, but speaking her mind comes easy and sometimes it is as if she has no restraints. She would probably tell me to just fire his book-keeping ass and get on with it. But she will always get “little” again and complain about her body or the fact that we don’t call her enough.

Night-time amma once told me the story of how she got rid of grandpa. I never really knew the man, only ever talked to him on the phone. When he would call, my mom asked me to pick up the phone and say she wasn’t home. He would sigh and hang up. That was the entirety of our relationship and I have no other memories of that man. But I’ve heard stories. I know amma Lilla spared me a lot of pain that older members of the family had to endure.

The story of how amma Lilla broke free started as a volcanic eruption. I’m not speaking metaphorically. Hundreds of people living on a nearby island had to abandon their homes when the island suddenly decided to grow an extra mountain. The people sought refuge in the capital and as you can imagine, the event affected many families. It affected my grandparents too, in the most unlikely way. They didn’t live on the island, they lived in the capital and they were one of those people who opened their home to the poor islanders who lost everything. They hosted a couple, whose home was destroyed in the eruption. My grandpa and the woman had begun having an affair. Unfortunately, for grandpa, it was night-time amma who caught them in the act. Like a mother that lifts a car off her baby, Little Grandmother grabbed her husband, pulled his naked body off the woman in their bed, walked to the door and threw him out of the family for good.

The Eldfell eruption of 1973